Born in Eastern Europe, brought up in the wilderness of the Great White North, and later thrust into the urban jungle of New York City, it is no surprise that Petr Cancura’s musical pallet is as deep as it is wide. A saxophonist with a vast knowledge of Jazz, Balkan, African and American folk traditions, Petr performs on the tenor sax as well as the medium format black & white camera… all of which influences each other into a roots song & improvising music machine with a visual sensibility.

“This music was recorded so that you remember that everything is alright, even if you feel like you don’t fit in,” writes Cancura in the album liner notes. “This music is about that feeling when you drive down a country road in the middle of the summer with the windows open. It’s about the fun of rocking out and singing a song… capturing that moment of hope, when you believe that anything is actually possible.”

“It’s about doing whatever it takes to slow down this crazy world! The album is about setting out on adventures, so you can find another way home and do it all over again. The album is about songs and their stories. The saxophone on this album is the voice, and when you listen to it, you get to hear your own words and tell your own story.” 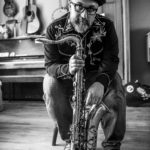